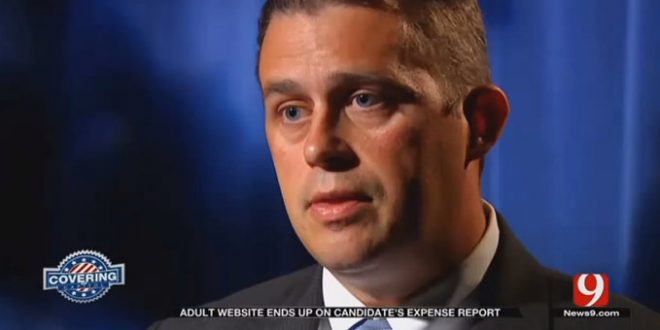 Jason Reese of Oklahoma City said an accountant he hired as his campaign treasurer inadvertently cut and pasted the video’s title into a report and filed it July 31 with the Oklahoma Ethics Commission. Reese said no campaign money was spent on pornography.

Reese said the staffer told him he was pasting a description of credit card processing fees into the report when he inadvertently clicked on a web page he had open on his personal computer.

“He apologized and resigned from the campaign today,” Reese said. The accountant didn’t immediately respond to an email seeking comment. Reese’s campaign filed an amended ethics report on Thursday.

Earlier today a blog site posted a story claiming my most recent campaign ethics report listed a questionable transaction that appeared to be associated with a transaction concerning illicit material. To be abundantly clear, no campaign funds were spent on any such material whatsoever, and I knew nothing about this matter until I read the blog.

After thoroughly investigating the issue with our campaign team, we have determined that the listing was human error on the part of the individual who prepared and submitted the report. That individual has accepted full responsibility and immediately offered his resignation.

The title of the video is Hotwife Chloe Needs To Be Punished. (Definitely do not google this at work!) On a related note, three GOP members of the Oklahoma legislature have resigned over sex scandals this year.