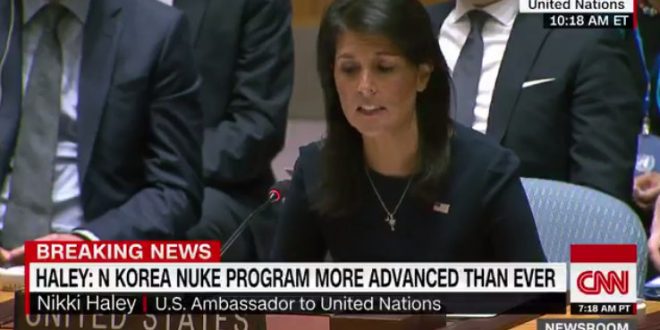 Her remark came a day after the North’s most powerful nuclear test, and hours after South Korean officials told lawmakers that North Korea may be making preparations to launch another ballistic missile to mark a national holiday over the coming weekend.

“We have kicked the can down the road long enough,” Ms. Haley told the council in an emergency meeting. “There is no more road left.”

But Ms. Haley did not threaten unilateral military action by Washington, or repeat President Trump’s statement on Twitter that South Korea’s call for more diplomacy was a form of “appeasement.” Ms. Haley said instead that “the time has come for us to exhaust all of our diplomatic means before it’s too late.”