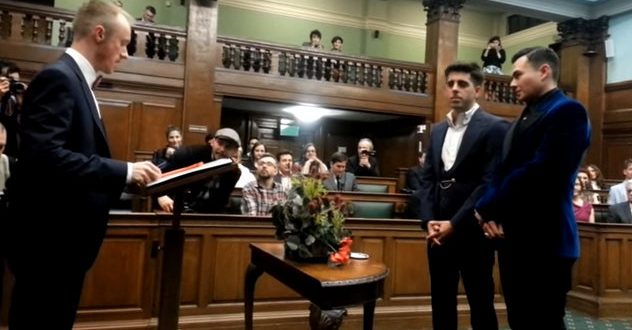 In 2014 they made history when they got married in London one minute after it became legal in England and Wales. Since then, however…

“Reality is how you perceive it. You can change that perception of reality — dictate it.” Most journalism barons don’t deal in metaphysics. For digital upstart Sean Adl-Tabatabai, 36, who talks of “the holographic nature of the world,” and his husband and business partner, Sinclair Treadway, 24, it could be a credo.

Your News Wire, their 3-year-old website of murky fact and slippery spin, has in the past year helped usher Donna Brazile out of her CNN gig and foment the Pizzagate frenzy with a key early post (which has generated 28,000 Facebook shares), all from an unlikely HQ for an alt-media operation: the couple’s live/work apartment at the historic El Royale (sometime home to the likes of Katie Holmes, Josh Brolin and Cameron Diaz) in L.A.’s Hancock Park.

Now YNW is emerging alongside the more high-profile Breitbart as an integral player in the Trump era’s L.A. alt-media axis. Despite Google’s decision to cut off YNW’s ad revenue and fact-checking site Snopes’ relentless efforts to debunk its incendiary reports, its founders are more energized than ever, as Treadway puts it, “to focus on what people aren’t focusing on — the information that the public isn’t already being told.”

You really should read the full article.