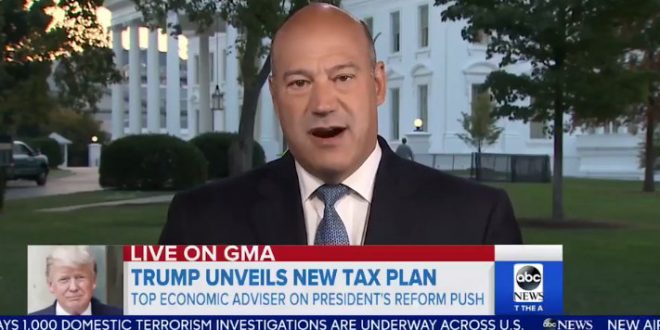 White House economic adviser Gary Cohn insisted Thursday morning that “the wealthy are not getting a tax cut under our plan,” a defense of President Donald Trump’s proposed overhaul of the tax code that contradicts what some experts have said about the plan.

Despite Cohn’s assurances, Democrats have argued that Trump’s tax plan will indeed benefit the wealthy, an assessment supported by a New York Times examination of the proposal that finds it would not benefit the lower third of Americans, but would provide significant tax relief to the wealthiest in the U.S.

But House Speaker Paul Ryan (R-Wis.) was more optimistic, suggesting in an interview on CNBC’s “Squawk Box” that at least a handful of moderate Democrats will get on board with Republicans’ tax plan and that some have already indicated they might support it.

Cohn said today that he can’t guarantee that taxes won’t go up for some middle-class families under the administration’s sweeping tax overhaul. “There’s an exception to every rule,” Cohn told ABC News chief anchor George Stephanopoulos in an interview on “Good Morning America.”

“I can’t guarantee anything,” said Cohn, the director of the White House Economic Council. “You can always find a unique family somewhere.” He said Trump’s plan is “purely aimed at middle-class families.” But Cohn acknowledged that “it depends which state you live in.”

And there you have it: