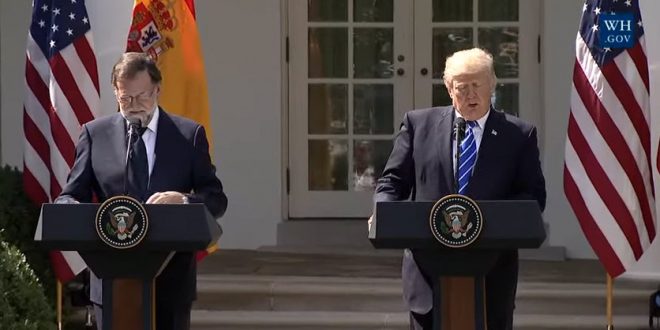 Trump will surely be grilled about the NFL, Puerto Rico, Trumpcare, and North Korea. But the Spanish prime minister’s presence will add a unique wrinkle to the press conference.

Spanish Prime Minister Mariano Rajoy will meet U.S. President Donald Trump in Washington Tuesday while his team back in Madrid attempts to turn the screws on a secessionist push in the nation’s largest economic region.

Spain’s premier will visit the White House five days before Catalonia’s regional government tries to open ballot stations for an illegal up-down vote on independence, in the biggest challenge to the country’s constitution in more than three decades. U.S. companies including Procter & Gamble and DowDuPont are among the largest foreign investors in Spain and have operations in Catalonia.

All the same, Spanish Defense Minister Maria Dolores de Cospedal said at a briefing in Washington that she’d been informed by her U.S. counterpart James Mattis on Sunday that the Trump administration backs her government’s handling of the Catalonia situation.

Rajoy has taken extraordinary measures to respond this month to the secessionist movement, including taking control of the regional government’s coffers. His administration also sent civil guards and national police to enforce judges’ orders to confiscate and arrest top activists and politicians organizing the vote.