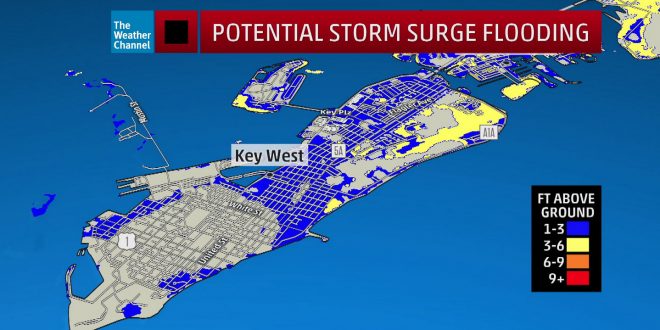 A “reasonable worst case scenario” forecast shows half of Key West underwater due to storm surge, according to a Weather Channel meteorologist. Hurricane Irma, a Category 3 storm as of 11 a.m., is predicted to turn away from Cuba and make landfall in the Sunshine State by Sunday morning. Forecasters say the eye is expected to make landfall in Key West. Officials and forecasters have warned of the dangers of “life-threatening” storm surge associated with the storm.

“A reasonable worst case scenario has over half of Key West underwater due to storm surge,” said Weather Channel meteorologist and weather producer Greg Diamond in a tweet that was retweeted by the National Weather Service Key West. “This is why @NWSKeyWest is saying to get out #irma.”

The graphic he shares shows large swaths of Key West under 1 to 3 feet of water. Key West sits at the end of a string of islands, or “Keys,” extending from the southern tip of the Florida peninsula. The National Weather Service predicts up to 5 to 10 feet of storm surge in the low-lying Florida Keys.

This morning Towleroad posted the below live cams. The last one has to be viewed on YouTube and I’ve noticed a few idiots taking selfies in the middle of Duval.

This is why @NWSKeyWest is saying to get out #irma pic.twitter.com/2xfv0anPsY

Previous Christian Site: God Sent Irma To Curse The Disobedient But It’s Not Too Late To Pray The Storm Out To Sea
Next Clooney: Failed Fucking Screenwriter Steve Bannon Would Be Licking My Ass If He Was Still In Hollywood