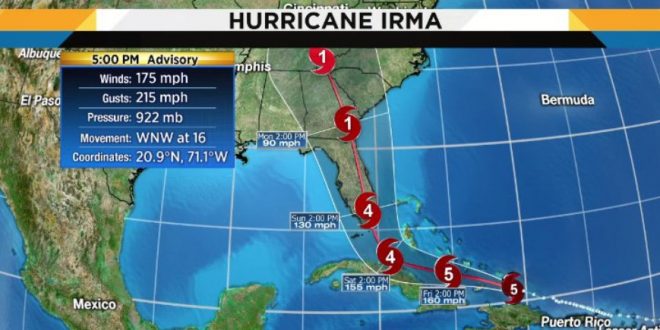 Hurricane Irma was on a track to slam Miami this weekend as it continued to cut a fatal and destructive swath through the Caribbean islands Thursday.

As of 6 p.m., Miami was about 52 hours from feeling the first effects of a killer storm that has already been blamed for at least nine deaths across a string of islands and has left more than a million people in Puerto Rico in the dark, NBC News’ Weather Unit said.

The good news is that Irma “has peaked in intensity” and likely to weaken very slowly over the next four days, the NBC forecasters said. But even a slightly weaker Irma could do serious damage to Miami and lash the low-lying city with 129 mph winds and gusts of up to 159 mph.

“Miami has no choice but to prepare for a strong Category 4 hurricane,” the NBC meteorologists warned. “Most of the damage in South Florida is expected from the storm surge and winds.”

And when Irma is done with Miami, it is expected to make landfall late Monday or early Tuesday further north in Georgia and South Carolina, the NBC forecasters said. The governors of Georgia, South Carolina and North Carolina have declared states of emergency.