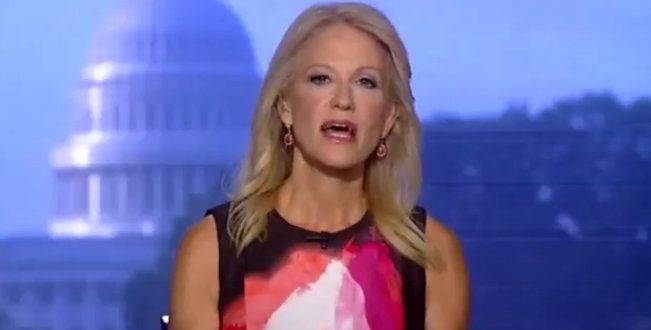 Propaganda Minister Kellyanne Conway: All The Trump Jokes At The Emmys Made People Tune Out [VIDEO]

White House adviser Kellyanne Conway was no fan of the overtly political tone at Sunday night’s Emmy awards, complaining Monday morning that the ceremony featured much of the “sameness” that she said is generally prevalent in Hollywood.

“They got plucked and polished and waxed and some of them didn’t eat for two months — and all for what? To sound the same? And they have a right to speak,” Conway told Fox News’ “Fox & Friends” Monday morning.

President Trump hates the way Alec Baldwin portrays him on “Saturday Night Live.” He also resents the Emmys for perpetually snubbing “The Apprentice.” According to Kellyanne Conway, however, the president is far too busy to give much thought to Baldwin’s Emmy win on Sunday — or his taunting of Trump for all those years without an award.

The White House adviser’s comments on “Fox & Friends” Monday morning seemed like the latest attempt to influence the president’s behavior through a TV appearance.

Roughly 24 hours earlier, Trump had appeared far less busy and focused than Conway described, as he retweeted a series of Internet memes, including one in which he knocks down Hillary Clinton with a golf ball.