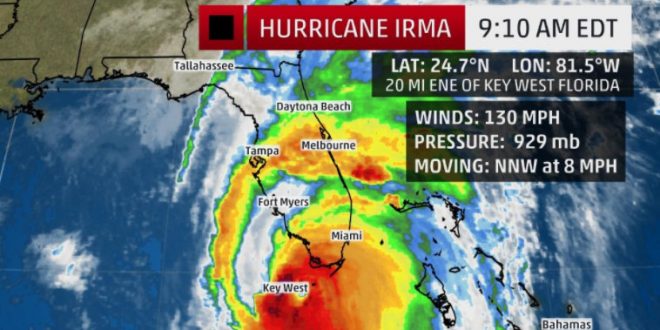 Irma Makes Landfall Near Key West As Category 4, Power Out For Over 1 Million Across Florida [VIDEO]

Announcing itself with roaring 130 mph winds, Hurricane Irma plowed into the mostly emptied-out Florida Keys early Sunday for the start of what could be a slow, ruinous march up the state’s west coast toward the heavily populated Tampa-St. Petersburg area.

“The most important thing is to pray for us,” Gov. Rick Scott said on NBC. With an estimated 127,000 huddling in shelters statewide, the storm lashed the low-lying string of islands with drenching rain and knocked out power to over 1 million customers across Florida.

About 30,000 people heeded orders to evacuate the Keys as the storm closed in, but an untold number refused to leave, in part because to many storm-hardened residents, staying behind in the face of danger is a point of pride.

While the projected track showed Irma raking the state’s Gulf Coast, forecasters warned that the entire Florida peninsula — including the Miami metropolitan area of 6 million people — was in extreme danger from the monstrous storm, almost 400 miles wide.