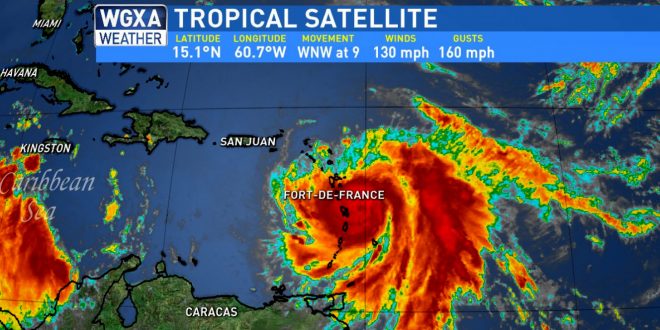 Maria was upgraded to an “extremely dangerous” Category 4 storm this afternoon, the National Hurricane Center said, as islands including Puerto Rico brace for the impact. Maria is expected to approach Puerto Rico — which is under a hurricane warning — late Wednesday morning. Maria might make landfall on the eastern side of Puerto Rico and could bring major damage to the U.S. territory late Wednesday morning and into the afternoon, two weeks to the day since Hurricane Irma tore through Puerto Rico, killing at least three.

Evacuation orders have been issued for parts of Puerto Rico. Puerto Rico Gov. Ricardo Rossello said starting midday Tuesday, conditions will begin to deteriorate and the island could get between 12 and 18 inches of rain. Officials said 450 shelters will be opened starting this afternoon and warned of possible catastrophic damage and a possible collapse of the “vulnerable” electrical system. Some Caribbean islands, like Guadeloupe and Dominica, are likely to get a direct hit from the powerful hurricane this afternoon or evening.