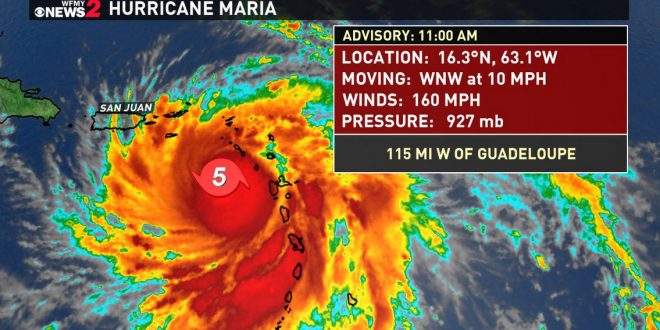 Hurricane Maria left a trail of destruction as it hit the Caribbean island of Dominica as a Category 5 storm and then battered Guadeloupe with powerful winds early Tuesday. Forecasters warned that the storm could leave some parts of Puerto Rico and the U.S. Virgin Islands uninhabitable for months.

NBC News meteorologist Bill Karins highlighted that Maria was one of the fastest intensifying hurricanes ever recorded. It blew up from a tropical storm into a major Category 5 hurricane in barely more than a day.

Maria was expected to hit the Virgin Islands by Tuesday afternoon and Puerto Rico late Tuesday into early Wednesday, the hurricane center said. It warned the storm could be “potentially catastrophic.”

With hurricane-force winds likely to continue across both territories for as long as 24 hours, forecasters said, Maria was shaping up to be even more destructive than Hurricane Irma, which killed at least 70 people across the Caribbean and the Southeastern United States beginning in late August.

Authorities in Puerto Rico are calling for “people in wooden or flimsy homes” to find shelter, The Associated Press reports. “You have to evacuate. Otherwise, you’re going to die,” said Puerto Rico’s public safety commissioner, Hector Pesquera, according to the news service. “I don’t know how to make this any clearer.”

As NPR’s Colin Dwyer has reported, the U.S. territory is “already reeling from billions in debt” and is in the middle of a debt-restructuring process. The economic situation could make relief efforts that much more difficult. On islands already devastated by Irma, there are fears that a second hit could make a dangerous situation even worse by kicking up piles of debris

Governor of Puerto Rico calls for evacuations now ahead of Hurricane Maria. pic.twitter.com/I7aUagZMgF