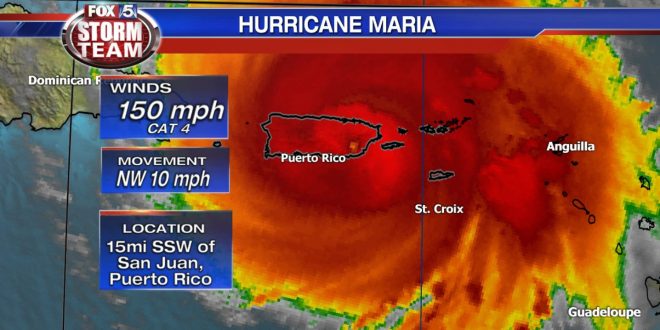 One of the strongest hurricanes to ever hit Puerto Rico pummeled the island Wednesday, tearing off roofs and sending doors flying from hinges as officials warned Hurricane Maria would decimate the power company’s crumbling infrastructure and force the government to rebuild dozens of communities.

Maria, which has killed at least nine in the Caribbean, made landfall early Wednesday in the southeast coastal town of Yabucoa as a Category 4 storm with winds of 155 mph (250 kph) winds, and it was expected to punish the island with life-threatening winds for 12 to 24 hours, forecasters said.

Maria, which had previously been a Category 5 storm with 175 mph (281 kph) winds, hit Puerto Rico as the third strongest storm to make landfall in the United States based on a key measurement that meteorologists use: air pressure. The lower the central pressure a storm the stronger it is and Maria’s pressure was 917 millibars, lower than Irma’s U.S. landfall of 929 millibars in the Florida Keys earlier this month.