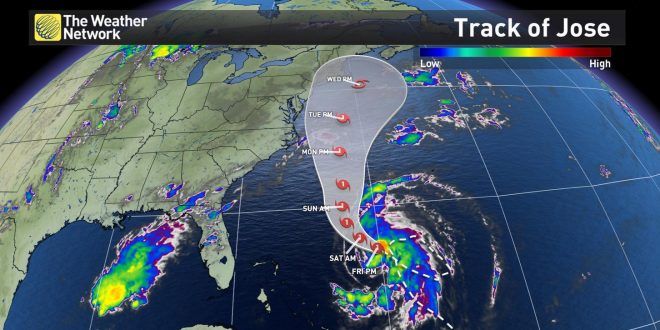 Hurricane Jose may threaten New York City and other areas of the East Coast by next week, according to the National Hurricane Center. The storm, about 550 miles (885 kilometers) south-southeast of Cape Hatteras, North Carolina, strengthened into a Category 1 hurricane Friday as it churned through the Atlantic Ocean. Jose’s path could put it near New Jersey and New York by Wednesday morning, though it may weaken to a tropical storm again by then, the center said.

As of 5 a.m. New York time, Jose was moving northwest at 9 miles an hour with maximum winds of 80 mph and could strengthen over the next two days, the center said. Tropical storm watches could be issued for the U.S. coast on Saturday, according to the advisory.