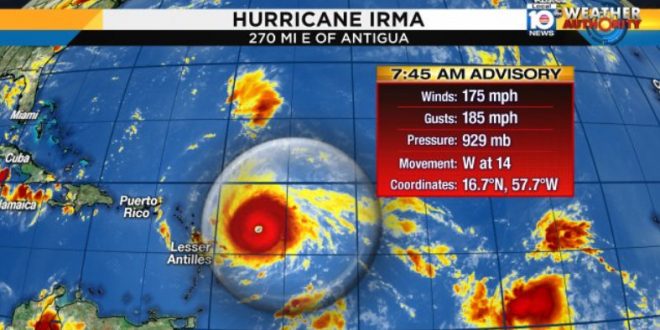 Hurricane Irma has strengthened into a dangerous Category 5 hurricane as it bears down on the Leeward Islands, and will rake through the Virgin Islands, Puerto Rico, Hispañola, the Bahamas and Cuba before posing a dangerous threat to Florida and parts of the Southeast beginning this weekend.

The center of Irma is located just under 300 miles east of the Leeward Islands and is moving westward at about 15 mph. Irma’s maximum sustained winds have increased to 175 mph based on data from NOAA and Air Force Hurricane Hunter aircraft.

By this weekend, Irma will begin to turn north in the direction of a departing southward dip in the jet stream that will set up in the eastern United States. Where that northward turn occurs will be critical for what impacts Irma may bring to parts of the southeastern United States.