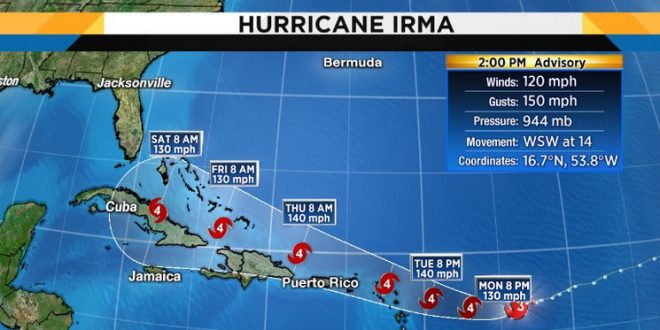 Hurricane Irma is a growing threat to the continental United States, with impacts possibly beginning in Florida later this week. Before that, Irma will bring dangerous conditions to the Leeward Islands, Puerto Rico, Hispaniola, the Bahamas and Cuba.

It is too soon to speculate on the specifics surrounding the U.S. threat from Irma, but the hurricane is forecast to remain powerful as it draws closer to Florida later this week.

For now, all residents along the Southeast Coast and eastern Gulf Coast, including Florida, Georgia and the Carolinas, should monitor the progress of Irma closely.

Unfortunately, the agreement by day 5 between the GFS & EURO is remarkable. #Irma pic.twitter.com/um6gtEOl1G