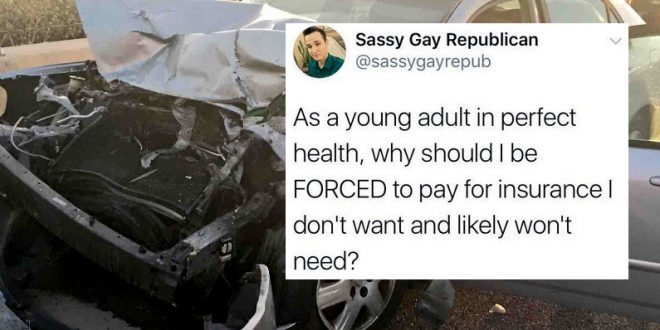 Arizona-based Twitter user Sassy Gay Republican is relatively popular as homocons go, with 30,000 readers following his prolific attacks on Obamacare, progressive politics, and “lying and corrupt Democrats.” But today he’s rather a laughingstock after posting a GoFundMe to pay his hospital bill after a car accident.

From his money beg: It all happened so fast & my brain is blocking out a lot of what happened. If you’ve been in a wreck this serious, you know exactly what I mean. Unfortunately, because of this tragedy, I had to be hospitalized & I’ve been prescribed pain killers & muscle relaxers. Additionally, I might need some physical therapy but this ultimately relies on my personal finances.

The hospital was a given, & the bill will likely be in the thousands (they didn’t accept my insurance). My car is completely totaled & I’m a pizza delivery driver. This is my only source of income at the moment & my job is on hold until I can find a way to get another used car, preferably Toyota because my last car was perfectly running at 310k miles.

I’m so desperate right now to keep the positive energy up & pray to God for saving me. There are no more coincidences anymore. Everything happens for a reason, & God puts us through exactly what we can handle. This was a huge test for me & it seriously made my think about how I need to be more aware & careful when I drive. No one is a better teacher than God providing me with experience.

Without believing in Him, I would not be able to hold myself together as I’m trying so hard to do, momentarily. I understand some of you might not be able to contribute, but could you please consider sharing this with someone who might? I need help & I know my Twitter followers & my higher power are always there for me.

Just letting you guys know I’m in recovery. If you have the time, please read. If you can, please help out & share. https://t.co/19LphysBEz

As a young adult in perfect health, why should I be FORCED to pay for insurance I don’t want and likely won’t need?

You know the Democratic Party is gonna collapse when the leaders & followers can’t even stand each other cause of all the lies/corruption.

Where’s the motivation to work hard if Dems wanna give me free healthcare, food stamps, & welfare checks. Cash those in for drugs & I’m set!

#LGBT Community doesn’t represent me. I preach about God & Love. They preach about Drugs & Sex. That’s not a family, that’s a toxic culture.

Previous Sanders: Rocket Man Nickname Is A “Trump Original”
Next Coulter: If We’re Not Getting The Wall, We Should Get An Attractive And Dignified President Like Mike Pence