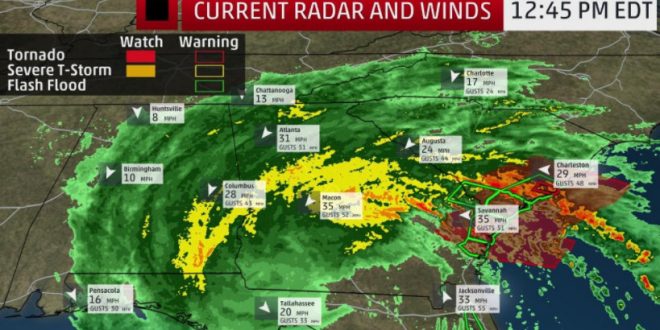 Delta Air Lines, said Monday that it has canceled about 900 flights, more than a third from Hartsfield-Jackson Atlanta International. The airline, which has a major hub at Hartsfield-Jackson and operates about 80 percent of the flights in Atlanta, said the extremely windy conditions expected to be unleashed by Irma exceed operating limits on some aircraft.

Irma’s impact in Atlanta could disrupt the travel of thousands who pass through Hartsfield-Jackson. The airport has as many as 2,800 daily departures, and roughly 275,000 passengers each day. The airport also is a major transfer point for travel throughout the southeastern region of the United States, an area already reeling from the impact of travel disrupted by Irma’s impact.

“Armed with the latest forecast and hurricane projections, Delta teams in the airline’s Operations and Customer Center have decided to cancel about 900 flights Monday as Hurricane Irma is expected to bring to the Atlanta hub strong crosswinds that exceed operating limits on select mainline and regional aircraft,” Delta said in a statement early Monday.

“As is the case at all airports, Atlanta’s five runways are aligned with the prevailing wind, which generally blows from the east or west. Aircraft are best suited to take off and land into the wind for better performance.

“When the wind direction is perpendicular to the runway, it’s called a crosswind and can make landing challenging and potentially unsafe. A slight crosswind is allowable and can be safely managed, but a 40 mph or greater crosswind, as the storm is expected to bring in Atlanta, may exceed allowable limits.”

#Florida #Airports that are remain closed due to #HurricaneIrma damage ✈️ pic.twitter.com/WVPdKibJ4M