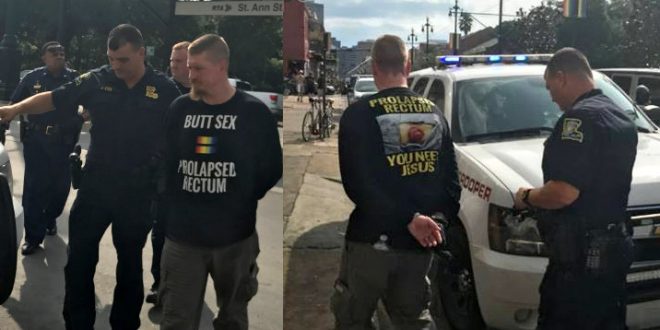 One of the preachers in the hate group “Official Street Preachers” was arrested during the Southern Decadence parade Sunday.

Details of the arrest were unavailable but apparently he was seen by a state trooper assaulting a female parade bystander. The group came to New Orleans to disrupt Southern Decadence.

Below is a photo of the same preacher shortly before he was arrested. The group was on Royal St. harassing the crowd waiting for the Decadence parade. Note the hateful signs and vulgar shirt he’s wearing.

Earlier an NOPD officer had tried unsuccessfully to get the group to quit following the parade. Thank you Louisiana State Troopers and NOPD.

I had my own encounter with these jerks on Saturday. NOTE: Some outlets are today mistakenly reporting that nine hate preachers were arrested. That incident actually happened in 2012.