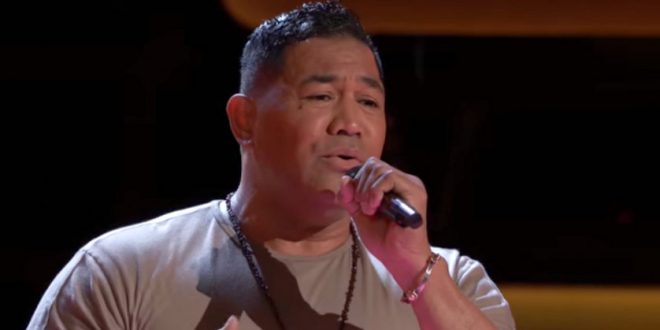 Previously, this singing contestant was a human wrecking ball, but on Monday night, he was wreaking havoc on people’s emotions with his singing strength.

Former NFL player Esera Tuaolo amazed The Voice judges and the audience with his rendition of Andra Day’s “Rise Up” on the premiere of the singing TV show.

Tuaolo, 49, kept his sexual orientation a secret from his NFL teammates during the nine years he was a defensive tackle, but the player revealed on Monday night’s show what it was like to finally come out.

“When I finished in the NFL, I came out to my family. When I said those words for the first [time], when I said that I was gay, it was like this huge mountain just crumbled,” the former Minnesota Vikings player said.

Also winning rave reviews last night was drag performer Chris Weaver, whose performance caused something of a tussle between the judges seeking to be his coach for the competition.

Sundays just got that much better with my new buddy Esera! And he’s a great singer too? Double whammy! #VoicePremiere