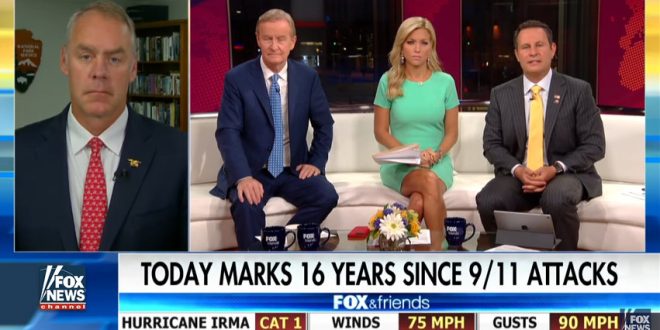 Secretary of the Interior Ryan Zinke appeared on Fox & Friends Monday morning — on the anniversary of the 9/11 terror attacks — ahead of remarks he is set to deliver alongside Vice President Mike Pence at the Flight 93 National Memorial in Pennsylvania.

And Fox & Friends host Brian Kilmeade seized at the opportunity…to tie the 9/11 memorial to the highly politicized debate surrounding the removal of Confederate statues in the U.S. “Do you worry 100 years from now that someone’s going to try and take that memorial down like they’re trying to remake our memorials today?” Kilmeade asked.

After a pause, in which Zinke appeared to digest the absurdity of Kilmeade’s question, he said he believes that “we should learn from our country’s history.”

Fox & Friends seriously just compared a 9/11 memorial to Confederate statues, asking if we’ll be tearing down 9/11 memorials in 100 years: pic.twitter.com/Y5Xg1dsB0d

Equating the 9/11 memorial with Confederate monuments is like equating the hosts of Fox & Friends with news.