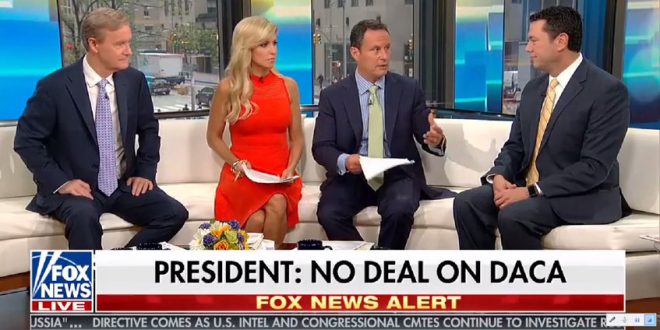 Fox & Friends took viewers on a trip down gaslight alley on Thursday, with the show hosts scrambling to make sense of the alleged deal between Donald Trump and “Chuck and Nancy” to save DACA and punt the border wall until later.

With the President doing major damage control this morning, it was left to ex-Congressman and Fox News contributor Jason Chaffetz to pick up the pieces. Chaffetz expounded on a theme from Trump this morning, insisting that the wall was “already there.”

Needless to say the idea of Mexico paying for any of this is now so out the window it wasn’t even discussed. It gets better. Minutes later, Fox & Friends‘ Steve Doocy floated the idea that the whole wall might have been “symbolic” and that maybe we would get to a point where “they won’t build the wall.”