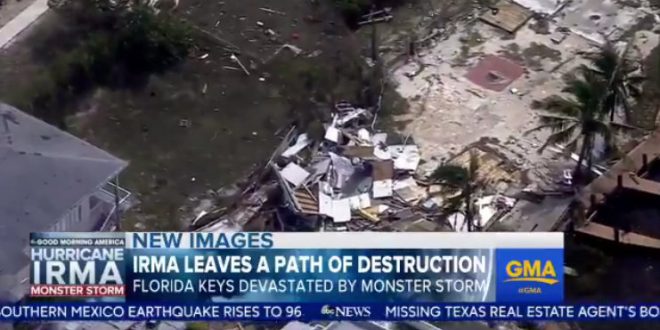 Initial estimates indicate 25% of the houses in the Florida Keys have been destroyed, and 65% have major damage, said Brock Long, the Federal Emergency Management Agency’s administrator. Basically, every house in the Keys was impacted some way,” Long said Tuesday. He said the numbers are early estimates and could change.

Irma left a trail of devastation throughout the Southeast, killing at least five people in the US, flooding major cities including Jacksonville, Florida, and Charleston, South Carolina, and leaving millions without power.

On Monday night, Irma was downgraded from a tropical storm to a tropical depression as the storm lumbered 95 miles south-southwest of Atlanta, Georgia. Irma is expected to turn toward Alabama and then into western Tennessee.

Monroe County reopened re-entry into the Keys for residents and business owners in Key Largo, Tavernier and Islamorada at 7 a.m. Tuesday.

Entry requires a yellow re-entry sticker or proof of residency or business ownership in those three cities. A roadblock will be put around Mile Marker 74, just before Sea Oates Beach where part of the road has washed out. An FDOT road crew will repair the road tomorrow.

Returning residents should consider that there are limited services. Most areas are still without power and water. Cell service is spotty. And most gas stations are still closed.

Hurricane Irma destroyed about 25% of the homes in the Florida Keys, FEMA says https://t.co/25o46Nj3DZ pic.twitter.com/zr7irAAJql

#Irma has cleared the Florida Keys. We are now able to get our first look at the damage and devastation left behind. https://t.co/7lqXDgUrbH pic.twitter.com/cBAy1z0gNJ