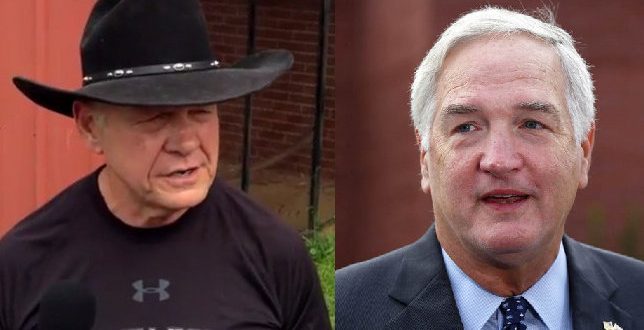 “In just over a month’s time, the gap between Moore and Strange has shrunk, from 6.1 points (Moore’s margin over Strange in the August 15th primary election) to a virtual dead heat,” van Lohuizen said in a memo detailing the poll’s findings.

Moore leads by double digits in other polls and his supporters are discounting this latest survey due to its connection to McConnell.

Meanwhile, the Democrat in the race is surging:

As Republicans slug out a bitter runoff for the Senate seat formerly held by Attorney General Jeff Sessions, a new poll shows surprising support for Democrat Doug Jones. According to a new Emerson College Poll, Jones is nipping at the heels of Sen. Luther Strange and his challenger, former Alabama Chief Justice Roy Moore.

Jones, a former federal prosecutor for the Birmingham district who successfully prosecuted the men responsible for the bombing of a black church that killed four young girls in 1963, trails Strange by only 3 points and Moore by 4 points.

Supporters of the two Republicans have such enmity for the other candidate that 25 percent of Moore’s backers told the poll they would vote for Jones if Strange wins the Sept. 26 runoff. And 31 percent of Strange’s voters say they go with Jones over Moore.