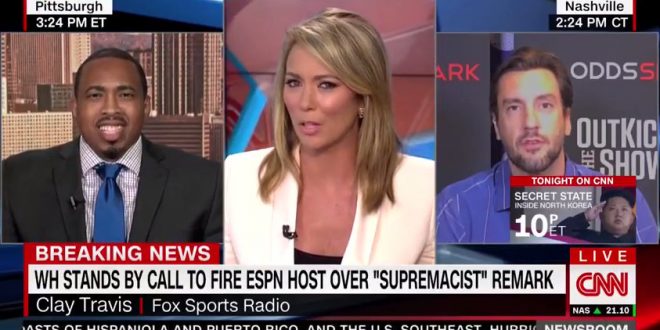 Unbelievable. Fox Sports analyst Clay Travis just told CNN’s Brooke Baldwin that he loves “boobs,” in a conversation about ESPN host Jemele Hill calling Donald Trump a white supremacist. Baldwin was taken aback at first, and once she confirmed what Travis had said — he continued to talk about his love of boobs, repeatedly — Baldwin said she was appalled and ended the segment.

I never heard of Travis until today but apparently he’s quite the boob-obsessed tool and even runs something he calls The Boob Draft. Here’s one entry:

Kate Upton has no discernible talent. She can’t act, she’s not a very good dancer, and she doesn’t have the traditional body of a supermodel. But what she does have is a very specific set of assets. Namely, two of them. Her boobs. And her boobs are enough to probably make her fifty million dollars or more. God bless those glorious, natural boobs. They’ve made Kate Upton a superstar.

We’d guess that was his first and final appearance on CNN, but then again they’ve kept ranting shitbags like Jeffrey Lord around for months and months.

Just went on @cnn and said I only believe in two things completely, the first amendment and boobs and the host lost it. Need video now.

As soon as I saw Clay Travis’s face on CNN, I turned it off. And then: https://t.co/l9eNaqaoj1

That moment where pervert @ClayTravis reduces America to “#1a and boobs.” Go to hell Clay, and good for @BrookeBCNN for shutting it down. pic.twitter.com/MmQB1ZA6SF

And yet, Clay Travis doesn’t seem to understand how offensive this is. Kudos to @BrookeBCNN for shutting it down. https://t.co/FpiTHa4pse