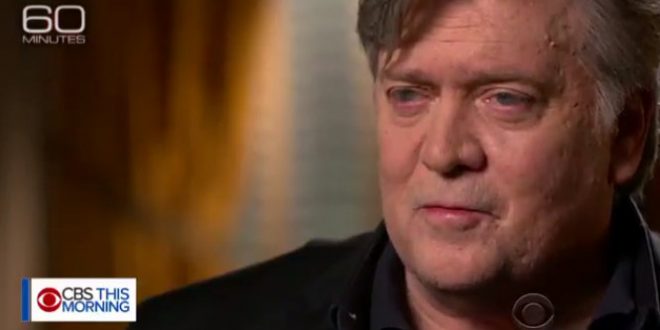 L to the O to the L. Via Mediaite:

In a now widespread article — titled “Photographer Explains How CBS Uses Color Adjustments To Make Steve Bannon ‘Look Bad’ On 60 Minutes” — the fringe conservative site Gateway Pundit promoted the idea that CBS “used color adjustments to make the Breitbart News boss ‘look bad’ on television.” This article was then picked up and spread by right-wing media giant The Drudge Report.

Kevin Tedesco, an executive director for communications at CBS News, shot down the theory by telling Abrams Media‘s Rachel Stockman that this notion is “nonsense.” Who was Gateway Pundit’s source for such an outrageous claim? That would be photographer Peter Duke, whose portfolio includes work for former Breitbart editor Milo Yiannopoulos, Trump fanboy Scott Adams, and conservative pundit James O’Keefe — demonstrating that his half-baked claim against CBS may have other motivations aside from the truth.

Right. Bannon looked like Halle Berry before those witches at CBS made him look like, well, Steve Bannon. https://t.co/7cbL5G6E3L