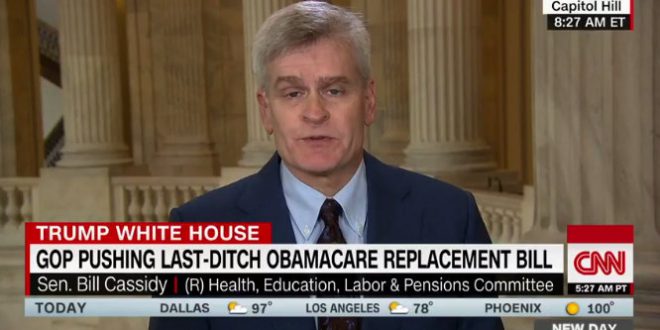 Cassidy Hits Back At Jimmy Kimmel: He Just Doesn’t Understand Our Plan To Destroy Obamacare [VIDEO]

CNN’s Chris Cuomo asked Cassidy about Kimmel’s comments on Wednesday morning, to which the senator replied: “I’m sorry he does not understand. Under Graham-Cassidy-Heller-Johnson more people will have coverage, and we protect those with pre-existing conditions.”

Cassidy’s bill would allow states to repeal ObamaCare protections that prevent people with pre-existing conditions from being charged extremely high premiums due to their illness.

But Cassidy argues people would still be protected because the bill requires states to show how coverage would still be “adequate and affordable” for those with pre-existing conditions. Critics counter that is a vague standard that offers no real protection.

Overall, the bill would eliminate ObamaCare’s expansion of the Medicaid program, tax credits and cost-sharing payments to insurance companies. Those funds would instead be delivered as block grants for the states to allocate.

.@BillCassidy responds to Kimmel: “I’m sorry he does not understand.” With new bill “more people will have coverage” https://t.co/1wWZe843vC