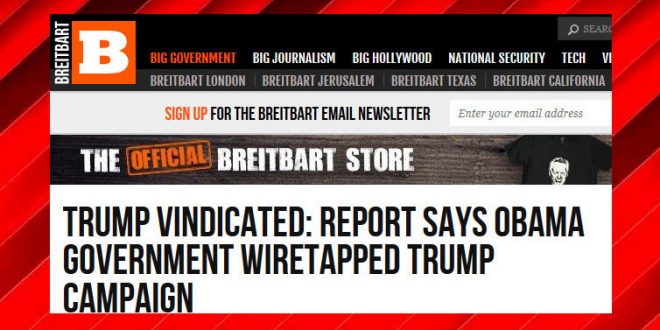 Late yesterday CNN reported that former Trump campaign chair Paul Manafort was wiretapped by the feds starting in 2014 over his murky financial dealings with Ukraine.

And even though that started long before anybody dreamed that Trump would run for president, today Breitbart claims this vindicates his claim of being wiretapped himself.

President Trump had tweeted on March 4: “Terrible! Just found out that Obama had my “wires tapped” in Trump Tower just before the victory. Nothing found. This is McCarthyism!”

Breitbart News editor Joel Pollak had reported the day before Trump’s tweet that the Obama administration “sought, and eventually obtained, authorization to eavesdrop on the Trump campaign: continued monitoring the Trump team even when no evidence of wrongdoing was found.”

Trump’s claim, and Breitbart News’s report, were mocked as a conspiracy theory, and other news outlets reported that there was no basis to the claims. CNN itself at the time called the idea that Trump was wiretapped “incendiary.”