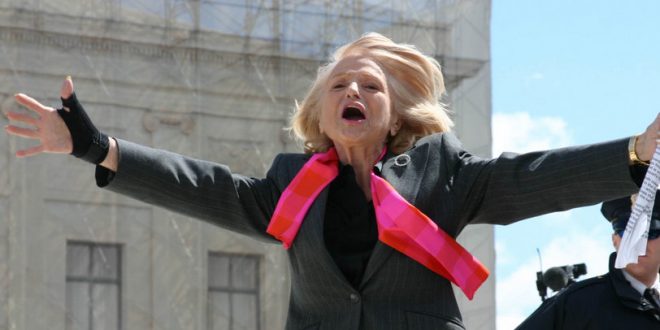 Edith Windsor, the gay-rights activist whose landmark Supreme Court case struck down the Defense of Marriage Act in 2013 and granted same-sex married couples federal recognition for the first time and rights to myriad federal benefits, died on Tuesday in Manhattan. She was 88. Her wife, Judith Kasen-Windsor, confirmed the death but did not specify a cause. They were married in 2016.

Four decades after the Stonewall Inn uprising fueled the fight for lesbian, gay, bisexual and transgender rights in America, Ms. Windsor, the widow of a woman with whom she had lived much of her life, became the lead plaintiff in what is widely regarded as the second most important Supreme Court ruling in the national battle over same-sex marriage rights.

The Windsor decision was limited to 13 states and the District of Columbia. But in 2015, the Supreme Court held that same-sex couples had a constitutional right to marry anywhere in the nation, with all the protections and privileges of heterosexual couples. Its historic significance was likened to that of Lawrence v. Texas in 2003, which decriminalized gay sex in the United States.

A TRUE legend. And so kind and amiable in person.

Very sad to read of Edith Windsor's passing. Our world is better for her life. Keeping her wife Judith, all her family & friends in my heart https://t.co/K3HebHZhyb

Deeply saddened by this loss. Edie Windsor was a leader and changemaker who will live on in history. https://t.co/vGrnEj7CDY

A pioneer whose legacy will live on forever. Rest in peace, Edie. https://t.co/I05OmbAu4c

Previous White House Suggests Prosecuting Comey: It’s The Job Of The DOJ And They Should Look At Doing It [VIDEO]
Next Civil Rights Groups Pay Tribute To Edith Windsor