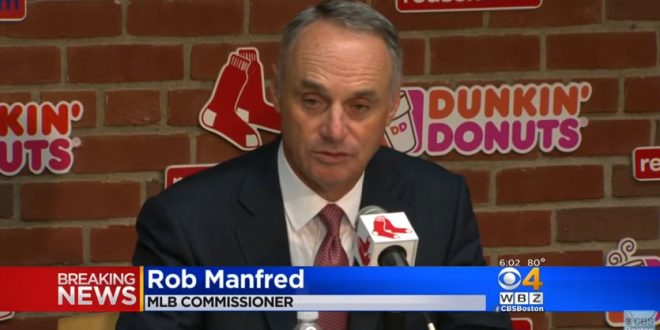 For decades, spying on another team has been as much a part of baseball’s gamesmanship as brushback pitches and hard slides. The Boston Red Sox have apparently added a modern — and illicit — twist: They used an Apple Watch to gain an advantage against the Yankees and other teams.

Investigators for Major League Baseball have determined that the Red Sox, who are in first place in the American League East and very likely headed to the playoffs, executed a scheme to illicitly steal hand signals from opponents’ catchers in games against the second-place Yankees and other teams, according to several people briefed on the matter.

The baseball inquiry began about two weeks ago, after the Yankees’ general manager, Brian Cashman, filed a detailed complaint with the commissioner’s office that included video the Yankees shot of the Red Sox dugout during a three-game series between the two teams in Boston last month.

More from the New Yorker:

The Red Sox’s alleged scheme went like this: when the team was at bat and had a runner on second base—a rare enough situation, yet a vital one—an employee in the video department who was watching the Yankees’ catcher would decode the signals he was using to call pitches then transmit the information to a trainer in the Sox dugout who was wearing an Apple Watch.

The trainer would then give that information to a player standing nearby, who would signal to the teammate on second base, letting him know what to look for. The base-runner would then signal in to the batter, giving him the advantage of knowing which pitch was coming before it was thrown—as long as this game of telephone hadn’t garbled the original message.

Previous Putin Regrets Awarding Tillerson Russia’s Order Of Friendship: He’s Fallen In With The Wrong Company
Next Bannon: The Catholic Church Supports DACA Because They Need “Illegal Aliens” To Fill Their Pews [VIDEO]