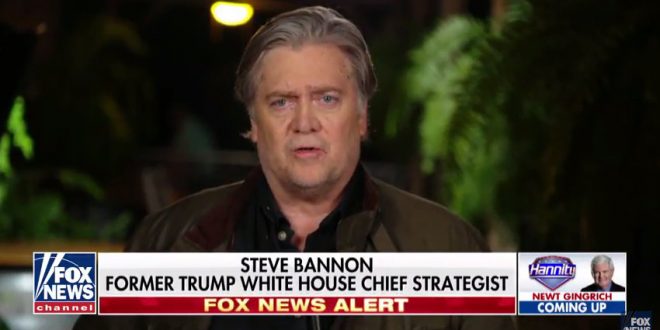 Bannon Rages Against GOP And Mitch McConnell: I Wear Their Contempt As A Badge Of Honor [VIDEO]

“The elites represented by Mitch McConnell hold me in contempt,” Bannnon told Fox News’ Sean Hannity in a rare TV interview. “They think I’m a bad guy. They think I’m a dangerous guy.” “I wear their contempt as a badge of honor, OK?” Bannon said.

The Breitbart executive, who rejoined the conservative website after leaving the West Wing last month, said McConnell and other Republicans “have helped destroy” the United States with the policies they have pushed. “They have done nothing but allow economic hate crimes against working men and women in the heartland of this country,” Bannon said. “We’ve got to stop it.”