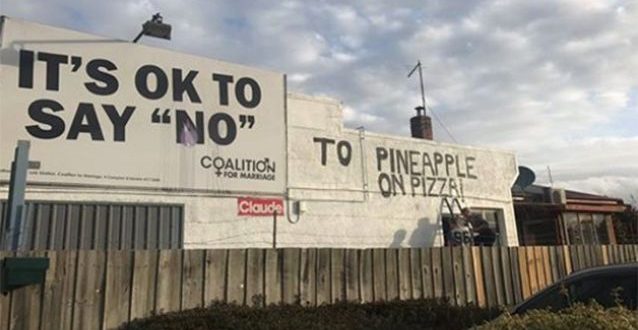 The staff of a Launceston pizza shop have altered the meaning of an anti-same-sex-marriage billboard next to their business, a day after a Hobart hotel distanced itself from a billboard atop its premises. Employees at Wiseguise Pizza, in the suburb of Mowbray, started painting the brick wall adjacent to the “It’s OK to say no” sign, adding the words “to pineapple on pizza”.

Worker Ben Barwick said the shop did not want to take a political stance. “We are painting the side of our building, not on the sign, and basically turning that into a bit of humour,” he said. Wiseguise managing director Alex Jones said he believed the billboard would have had a negative impact on business. Mr Jones said the billboard, which supports a No vote in the Federal Government’s same-sex marriage postal survey, was put up on Thursday morning and was defaced with purple paint by a member of the public a short time later.

For the record, I’m very pro-pineapple on pizza.