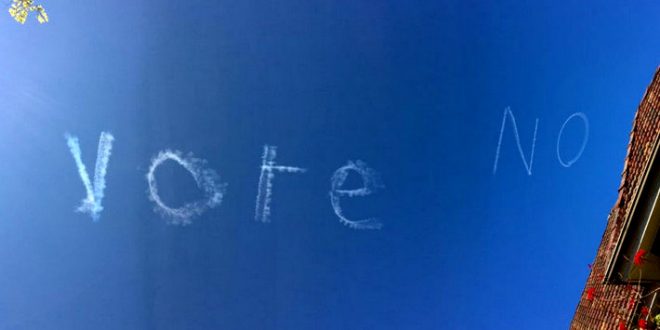 Skywriting appeared over Sydney today to encourage Australians to ‘Vote No’ to marriage equality. Australians are currently voting in a expensive and divisive postal vote on same-sex marriage. They have until 27 October to post their votes back, with results announced 15 November. But the ‘No’ campaign ramped up their attempts to sway people against same-sex marriage in various locations across Sydney.

From the skywriting GoFundMe page:

It’s time for traditional Australian’s to take a stand! We have been bullied into silence, condemned for our views and ignored and vilified by the media. Enough is enough! It’s time we all sent a clear message that we will not put up with our way of life been deconstructed any further! If you feel like us that its time finally for our voice to be heard, join us as we shout our message “Vote No” into the sky for all to see. This is your chance to help ensure our voice is ignored no longer and take joy in knowing that our message will be painted bright sky for all to see!

Seen over the skies of Sydney. pic.twitter.com/4D29vNZGjH

just sayin the last time some asshole bullied a bunch of queers via skywriting it didn’t end great for her pic.twitter.com/SFoQBwTQ9I

Much better kerning, and I didn’t pay a cent for the skywriting. pic.twitter.com/0UvylgUntH