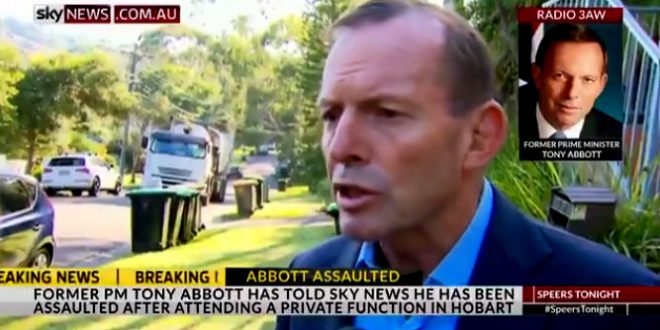 Mr. Abbott told 2GB he was walking back to his hotel following a meeting with a newspaper editor when he was beckoned by a man in the street. “A fellow sung out at me ‘Hey, Tony’, I turned around, there was a chap wearing a vote ‘Yes’ badge,” he said.

“He says ‘I want to shake your hand’. I went over to shake his hand and he headbutted me.” A boxer during his university days, Mr Abbott was critical of the man’s head butt: “He wasn’t very good at it, I’ve got to say. But he did make contact. The only damage was a very, very slightly swollen lip.”

More from The Guardian:

Prime Minister Malcolm Turnbull called Abbott as soon as he heard about the incident and left a voicemail, according to a spokesman. He also called Andrew Colvin, the commissioner of the Australian Federal Police.

Abbott told the story to Steve Price and Sky News host Andrew Bolt on Melbourne’s 3AW radio on Thursday. Price said Abbott was lucky to have a witness to the assault because some yes campaigners would accuse him of making the story up if he didn’t. “Oh without a doubt,” Bolt said.

Alex Greenwich MP, the co-chair of The Equality Campaign, has condemned the attack. “There is absolutely no place for violence in the marriage equality debate. This is about treating people fairly and with respect & dignity,” he said on Twitter.

This is terrible – violence like this is never acceptable. I’m glad Mr Abbott isn’t seriously injured and I’ve rung him to say so. https://t.co/FkSOUhObgZ