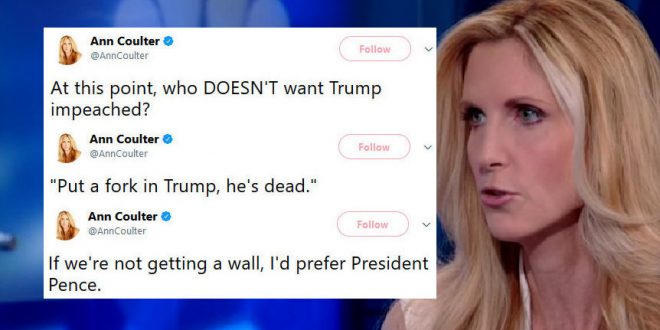 Conservative commentator and author Ann Coulter’s support for President Trump is on thin ice after he tweeted support for recipients of Deferred Action for Childhood Arrivals program. Trump asked early Thursday why anyone would want to “throw out good, educated and accomplished young people who have jobs, some serving in the military.”

Coulter, a staunch supporter of Trump’s proposed border wall, has become increasingly fed up with Trump as he’s occasionally strayed from his campaign promises. She tweeted later Thursday morning that she’d “prefer President Pence” if Trump won’t build a wall along the U.S.-Mexico border.

At this point, who DOESN'T want Trump impeached? https://t.co/g1mMhmm8ng

If we're not getting a wall, I'd prefer President Pence. https://t.co/g1mMhmm8ng