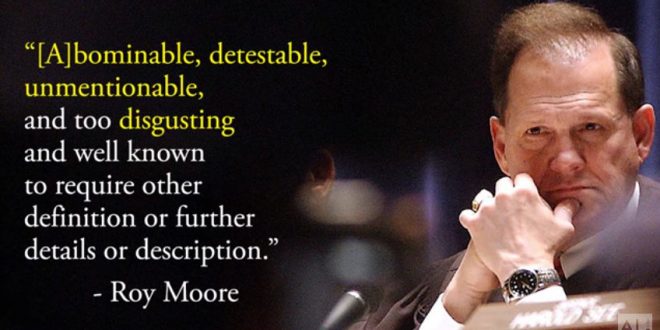 Last night the Birmingham News, Alabama’s largest newspaper, posted a blistering video attack on Roy Moore which compares him to notorious racist George Wallace and ticks off some of Moore’s nastiest attacks on LGBT Americans.

The video’s narrator, columnist Kyle Whitmire, flatly declares, “Roy Moore hates gay people and it’s worth taking a moment to see how much.” Whitmire then ticks off some of Moore’s most infamous attacks on LGBT families and notes that Moore himself recently compared himself to Vladimir Putin.

Watch every minute of the clip below. Later this month Moore faces Sen. Luther Strange in the Republican primary runoff and he’s expected to win.

Previous Stevie Wonder: Anyone Who Believes There’s No Such Thing As Global Warming Must Be Blind [VIDEO]
Next FLORIDA: At Least Five Dead At Hollywood Nursing Home After Days Without Air Conditioning [VIDEO]