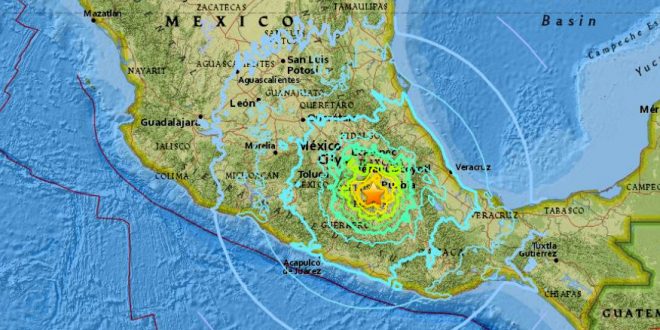 A powerful earthquake jolted Mexico City on Tuesday, seriously damaging buildings and sending people fleeing into the streets on the anniversary of a 1985 quake that did major damage to the capital. Local television stations broadcast images of collapsed facades and streets filled with rubble.

The extent of damage and injuries was not immediately clear. The U.S. Geological Survey calculated its preliminary magnitude at 7.1. The epicenter was about 93 miles southeast of Mexico City in the state of Puebla. Earlier in the day, buildings across the city held preparation drills on the anniversary of the 1985 quake.

On Mexico City’s main boulevard, thousands of people streamed out of buildings into the streets in a panic, filling the plaza around the Independence Monument with a mass of people.

Traffic came to a standstill, as masses of workers blocked streets. Clouds of dust rose from fallen pieces of facades. Office workers hugged each other to calm themselves. In the city’s Roma neighborhood, which was struck hard by the 85 quake, small piles of stucco and brick fallen from building facades littered the streets.

Mexico experienced an earthquake this afternoon exactly 32 years to the day when 1985 Mexico City earthquake left at least 5,000 dead. pic.twitter.com/VopGnC5aK2

Just some of the images coming out of #MexicoCity after 7.1 magnitude earthquake rattled the area. https://t.co/lBLppYYDK7 pic.twitter.com/5grr5EwmCR