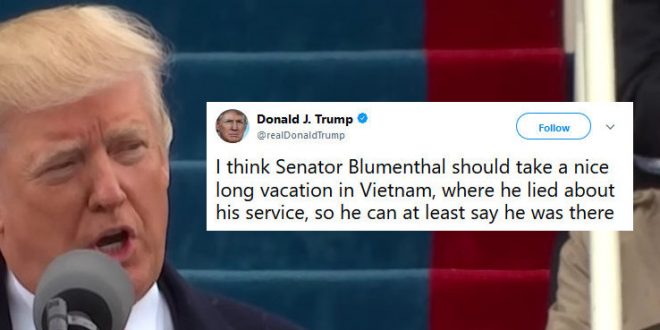 WORKING VACATION: Trump Fires Out Another Attack Minutes After CNN Panelist Calls Him A “Draft-Dodger”

Late this afternoon CNN’s Jake Tapper reported on Trump’s early morning tweetstorm, which included a three-tweet rant against Democratic Sen. Richard Blumenthal. And since today’s soggy weather has kept Trump off the golf course, he was obviously watching television and therefore just HAD to fire out another attack on Blumenthal after one of Tapper’s panelists said, “By any objective standard, the president himself is a draft-dodger.”

Mr. President: Your bullying hasn’t worked before and it won’t work now. No one is above the law.

I think Senator Blumenthal should take a nice long vacation in Vietnam, where he lied about his service, so he can at least say he was there