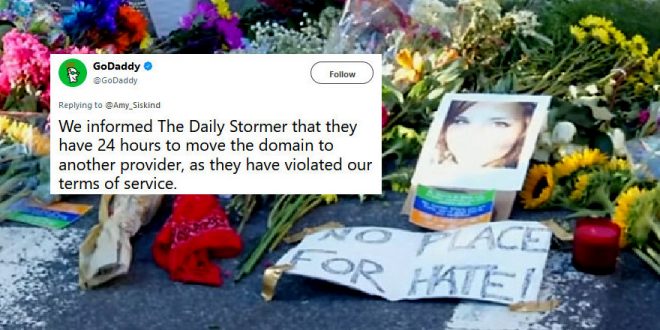 Web Host Bans Nazi Site: You Have 24 Hours To Move

After months of criticism that GoDaddy was providing a platform for hate speech, the Web hosting company announced late Sunday that it will no longer house the Daily Stormer, a neo-Nazi website that promotes white supremacist and white nationalist ideas.

GoDaddy said in a tweet that Daily Stormer had been told it had 24 hours to move its website domain to another provider because it had “violated” the Web host’s “terms of service.”

GoDaddy’s announcement was in response to an appeal from a Twitter user who called attention late Sunday to an online post by Daily Stormer founder Andrew Anglin. The post disparaged Heather Heyer, the 32-year-old woman killed Saturday in Charlottesville, police say, after a man plowed into a crowd with his vehicle.

On Monday morning, the Daily Stormer, a site run by the alt-right movement, appeared to be hacked by Anonymous. But the group hasn’t taken credit for it, and it’s been theorized that the Daily Stormer did it themselves in response to GoDaddy giving the site 24 hours to find a new server so they could blame hackers for the site’s imminent take-down. It is also strange that all of the site’s old content is still available on the site, despite the “hack.”

.@GoDaddy you host The Daily Stormer – they posted this on their site. Please retweet if you think this hate should be taken down & banned. pic.twitter.com/fqTtGoTbmn

We informed The Daily Stormer that they have 24 hours to move the domain to another provider, as they have violated our terms of service.