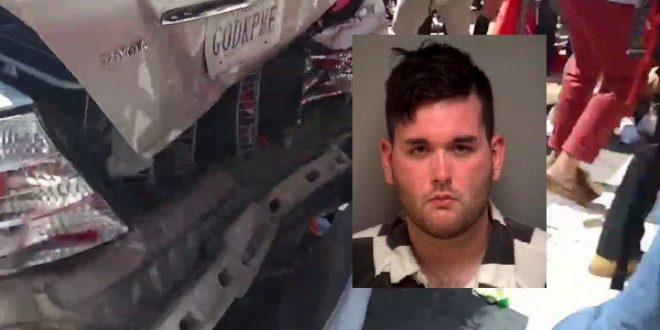 Video recorded at the scene of the car crash shows a 2010 gray Dodge Challenger accelerating into crowds on a pedestrian mall, sending bodies flying — and then reversing at high speed, hitting yet more people. Witnesses said the street was filled with people opposed to the white nationalists who had come to town bearing Confederate flags and anti-Semitic epithets. A 32-year-old woman was killed, according to police, who said they were investigating the crash as a criminal homicide. The driver of the Challenger was taken into custody and charges were pending, said Al Thomas, the Charlottesville police chief.

The car is registered to 20-year-old James Alex Fields of Ohio, according to vehicle registration records reviewed by The Washington Post. Albemarle-Charlottesville Regional Jail Superintendent Martin Kumer told The Post that a man with the same name and age was booked Saturday on suspicion of second-degree murder, malicious wounding, failure to stop for an accident involving a death, and hit-and-run. Kumer said Fields is being held without bail and is scheduled to be arraigned Monday in Charlottesville General District Court. Records show Fields last lived in Maumee, Ohio, about 15 miles southwest of Toledo.

All afternoon Trump supporters have been pumping out fake names on social media and claiming that the driver was actually a “Trump-hating leftist.” Fields is a registered Republican. So much for that.

Being held without bail on murder, other charges in Charlottesville hit-and-run: James Alex Fields, Jr., 20, of Maumee, Ohio.

Previous Alex Jones: Charlottesville Was A False Flag Run By SPLC Operatives Who Hired Actors To Pose As Nazis
Next Ivanka Trump Says What Her Father Refused To Say