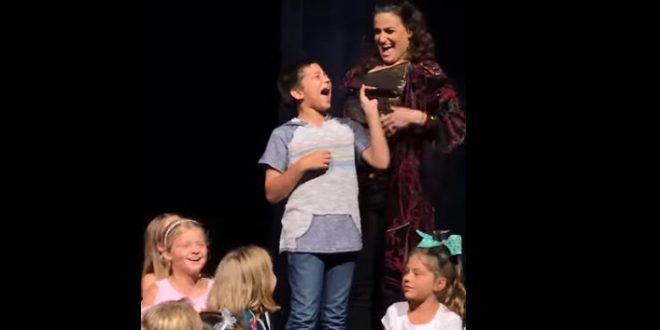 This time Idina Menzel didn’t want to “Let HIM go.” The “Frozen” singer and Broadway legend was closing out her Grand Prairie show and invited children to join her on stage to sing along to “Let It Go. Menzel nonchalantly began talking with Luke, the only boy on stage, and asked if he knew the song they were about to perform.

The young boy confidently answered, “‘Let It Go,’ obviously! What kind of question is that?” Menzel asked the boy to stand up and said, “Let me just tell you what I’ve been through, OK?” The singer goes on to explain that during her world tour in the last month that every time that a boy would come up, he would tell Menzel he doesn’t really like her song.

Without skipping a beat Luke responded with, “Heck to the no! I’m offended.” A tickled Menzel hands the microphone to Luke and asked all the children to sing the chorus of “Let It Go.” That’s when Luke blew the audience away.