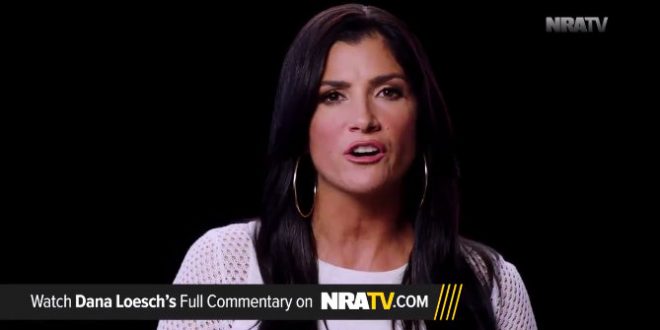 Unhinged NRA Spox Dana Loesch Threatens To Fist The New York Times: We Are Coming For You [VIDEO]

A spokeswoman for the NRA denied threatening to fist the New York Times — which she referred to as an “old gray hag” — in an officially sanctioned NRA video ostensibly promoting gun ownership. In the video, released by the NRA and entitled, “Dana Loesch: We’re Coming For You New York Times,” Loesch, the American conservative talk show host turned-NRA video spokesperson stares straight into the camera and accuses the paper of promoting “propaganda,” “fake news,” and the “constant protection of your democrat overlords.”

Loesch has denied using the word “fist,” saying in a statement that what she actually threatened to do was “fisk” the paper. But adding to the confusion is one of the hashtags appended to the NRA’s tweet containing the video — #ClenchedFistofTruth. And fisk is not a word in the Merriam Webster dictionary. Loesch has since blamed the confusion on Adam Goldman, a reporter for the New York Times for having “an axe to grind.”

.@DLoesch has a message for the @nytimes: “We’re coming for you.” One
non-#fakenews story is not enough. #NRA #ClenchedFistofTruth pic.twitter.com/Hm1QkJi5Tp

Nice – Literally everyone on here thinks you said “fist” and the NRA tweet says #ClenchedFistOfTruth – This is my fault somehow? https://t.co/l2zNYrLoT3

dumbest timeline is this one, in which i log off for half an hour only to return to see NRA lady has threatened to fist the new york times

Dana Loesch is a paid shill for the NRA who lies and attacks gun violence survivors. No one should be surprised she wants to fist the NYT. pic.twitter.com/qZXNa0VNwM

We’re having a ball debating fist vs. fisk but at the end of the day the NRA is threatening the press; let’s not forget that part.

Hmmmm. I walk out of police training to see the White House wants to jail journalists and the NRA wants to fist a newspaper. Okey dokey then

Previous Pharma Douche Brags That He’ll Escape Prison Time Because “I’m One Of The Richest New Yorkers There Is”
Next REPORT: Trump Blindsided Staffers With FBI Director Pick Because “He Was Simply Tired Of The Search”