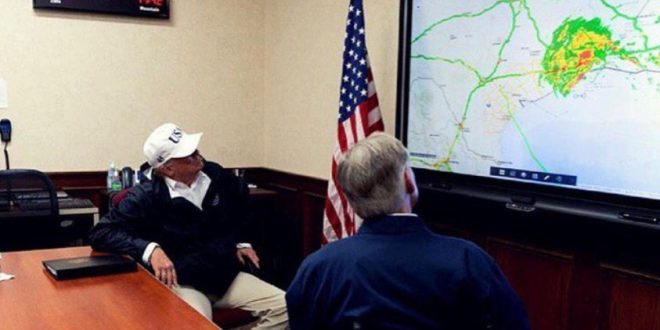 After Donald Trump claimed he witnessed the “horror and devastation” of Harvey “first hand” in Texas, a photo was posted to his Instagram account that shows the president staring at a screen with a map — an exact opposite of what one would describe as “first hand.” As the internet is known to do, Twitter roasted the president in snarky fashion by posting their own “first hand accounts” of historical events.

This is the best photo they could find for "witnessing first hand" pic.twitter.com/WoiCA7Piz4

Our reporting does not match claim that @POTUS witnessed any horror or devastation first hand. #harvey https://t.co/KP4ejyLVpF @dallasnews https://t.co/HBObIh9Tgt

let's not forget the day that Trump had a first-hand experience of walking on the moon pic.twitter.com/6FqbkMdCac

So, very similar to how Trump experienced combat in Vietnam first hand then? https://t.co/ofYCETpB1y