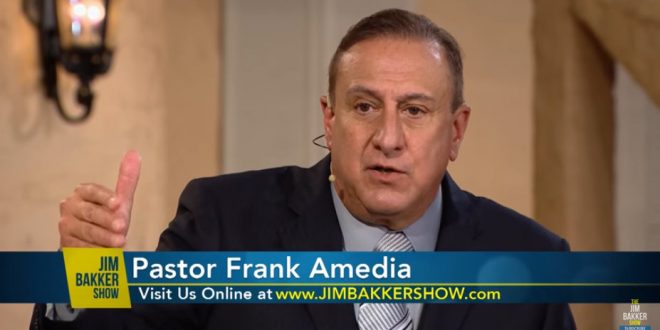 Pastor Frank Amedia, who is most famous for his claim that he personally prayed a tsunami away from Hawaii, first appeared on JMG last year when he described how Jesus sent him a vision of “demonic hornets” stinging Americans with the sin of “lustful homosexuality.”

Since then Amedia has led the “POTUS Shield” campaign to envelop the White House with prayers to protect Trump from liberals, Satan, and Satanic liberals. And now Jesus has told him to get a White House press pass.

Amedia revealed that he will soon be traveling to Washington, D.C., to seek White House press credentials for his organization so that they can use right-wing Christian media to help spread President Trump’s message directly to his supporters.

“The Lord had spoken to me and affirmed it not too long ago that we are to pray for a press reporting division of POTUS Shield,” Amedia said. “And so I intend, in the next couple of weeks, to head up to New York and Washington, D.C.,—I’m just waiting for the Lord to release me—and we’re going to lobby to get a presidential press pass for POTUS Shield.”

“We believe that, with that, we can be right there where we need to be and that we can prophetically be in the place we need to be,” he said, “so that we can have our finger on the pulse and we can begin to report things back as it’s supposed to go.”

According to Amedia, Jim Bakker and other scamvangelicals have already promised to carry his White House reporting.

Previous Roger Stone: Any Member Of Congress Who Votes For Impeachment Is “Endangering Their Own Life” [VIDEO]
Next Web Hosting Company Suffers DDoS Attack After Court Rules They Must Reveal Visitors To Anti-Trump Site