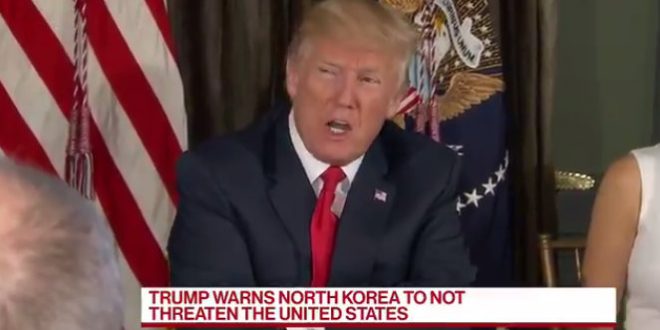 Trump Warns North Korea: “They Will Be Met With Fire And Fury Like The World Has Never Seen” [VIDEO]

President Trump addressed the ongoing crisis between the U.S. and North Korea at a briefing on opioids in New Jersey on Tuesday, issuing a stern warning to the regime for its continued provocations. “North Korea best not make any more threats to the United States,” warned Mr. Trump from his golf club in Bedminster.

Mr. Trump’s comments come amid reports that a U.S. intelligence assessment concluded North Korea has developed the ability to build a nuclear warhead small enough to fit on top of a ballistic missile, including an intercontinental missile that can reach the United States, CBS News’ David Martin confirmed.

President Trump says North Korea will be met with “fire and fury” if they continue to escalate https://t.co/Tv8kg6lpdt pic.twitter.com/KOUKuYaa6g