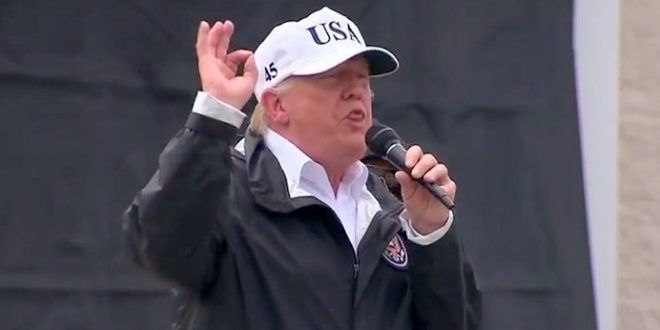 Trump In Texas: “What A Crowd! What A Turnout!”

During his visit to Texas in response to Hurricane Harvey, President Trump told a crowd gathered outside a Corpus Christi firehouse, “What a crowd! What a turnout!” according to media reports. Trump had met with local officials inside the firehouse. Corpus Christi was among the cities hard hit by the Category 4 storm.

Shortly after arriving Tuesday morning, Trump said in a press conference he hoped the response to Harvey would serve as an example in future disasters. “Nobody has seen something like this,” Trump said, flanked by First Lady Melania Trump, and Gov. Greg Abbott. “We won’t say congratulations. We don’t want to do that. We’ll congratulate each other when it’s all finished.”