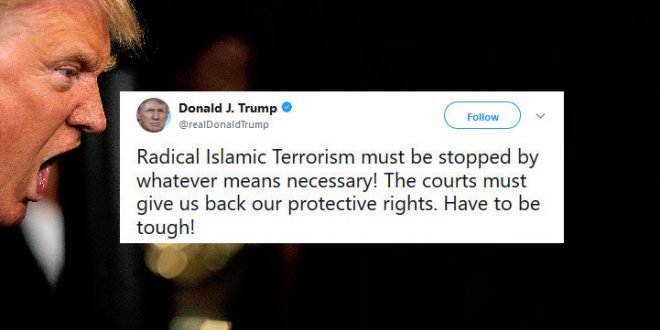 Tweeting the morning after 13 people were killed in Barcelona after a van plowed through crowds in a busy pedestrian area, President Donald Trump called on American courts to “give us our protective rights back” to stop “Radical Islamic Terrorism.”

The president has been heavily criticized by human rights and civil liberties advocates for his stances on combating terrorism, including his support for the US military prison in Guantanamo Bay, Cuba, for the use of torture in the interrogation of detainees, and for his ban on immigrants from several predominantly Muslim countries, among other positions.

Trump has also come under fire for focusing exclusively on terrorism perpetrated by adherents of radical Islam. Earlier this week, the president refused to label an attack on a group of protesters by a white supremacist in Charlottesville terrorism, even though the Justice Department is investigating the crime as an act of terror.

The Obstructionist Democrats make Security for our country very difficult. They use the courts and associated delay at all times. Must stop!

Radical Islamic Terrorism must be stopped by whatever means necessary! The courts must give us back our protective rights. Have to be tough!