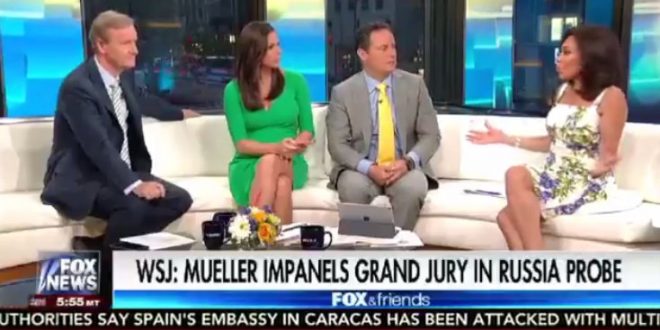 With a tap of the thumb, President Trump on Friday invited speculation that he or a family member could be indicted by a federal grand jury whose existence was reported a day earlier by the Wall Street Journal.

The president retweeted a video clip from the “Fox & Friends” morning show, his favorite, in which the hosts and guest Jeanine Pirro — “Judge Jeanine” on Fox and a longtime Trump friend — cast an investigation of possible coordination between Russia and the Trump campaign, led by special counsel Robert S. Mueller III, as a politically-motivated witch hunt.

That the president would endorse such a view is unsurprising, but it seemed odd that he would call the attention of his 35 million followers to what came next — a discussion of indictments.

“This is an agenda,” Pirro said, “and my concern is if they end up with an indictment against a family member just to, you know, just to get at Donald Trump when they couldn’t get at him, there’s gonna be real uproar, a real uprising in this country.”

Note that Fox doesn’t include the word “uprising” in their tweet. Trump, not incidentally, also retweeted James Woods this morning.

.@JudgeJeanine: There will be an uproar in this country if they end up with an indictment against a Trump family member just to get at POTUS pic.twitter.com/tm10kRA2Ws