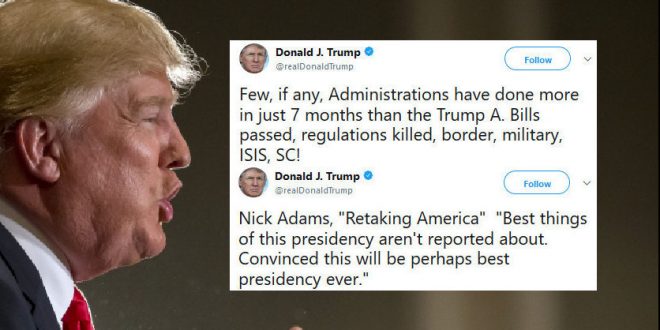 Trump: Mine Is The Best Presidency Ever

President Trump on Friday said that “few, if any,” other administration had been as productive in its first seven months as the Trump administration, citing the White House’s progress on job growth and other non-legislative achievements. His tweet came just minutes after he criticized Senate Republicans for not passing more bills, calling on them to get rid of the legislative filibuster. In a second tweet, Trump quoted author Nick Adams’ praise for the Trump administration from his book “Retaking America.”

If Senate Republicans don't get rid of the Filibuster Rule and go to a 51% majority, few bills will be passed. 8 Dems control the Senate!

General John Kelly is doing a fantastic job as Chief of Staff. There is tremendous spirit and talent in the W.H. Don't believe the Fake News

Few, if any, Administrations have done more in just 7 months than the Trump A. Bills passed, regulations killed, border, military, ISIS, SC!

Nick Adams, "Retaking America" "Best things of this presidency aren't reported about. Convinced this will be perhaps best presidency ever."

Thank you, Mr. President! You continue to make me an honest man every day! We are CRUSHING PC and making America Great Again! https://t.co/tnFVOOIJji