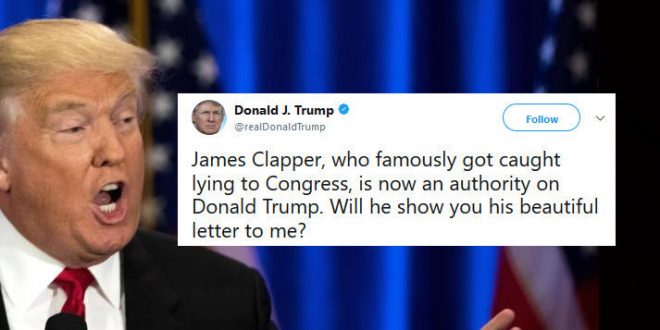 Here’s what Hair Furor is pissed about:

Former Director of National Intelligence James Clapper reiterated his concern about President Donald Trump’s ability to effectively lead the country on Wednesday night. “What caused concern is this … Jekyll-Hyde business where he’ll make a scripted teleprompter speech, which is good, and then turn around and negate it by sort of, unbridled, unleashed, unchaperoned Trump. And that to me — that pattern — is very disturbing,” Clapper told Jim Sciutto in an interview on CNN’s “Erin Burnett OutFront.”

Clapper emphasized he was speaking as a private citizen and not as a member of the intelligence community. Clapper — a CNN national security analyst — had questioned Trump’s “fitness” to hold the office of the President less than 24 hours earlier. That came during a “CNN Tonight” appearance early Wednesday, following Trump’s divisive campaign rally in Phoenix, Arizona, on Tuesday night.

The Fake News is now complaining about my different types of back to back speeches. Well, there was Afghanistan (somber), the big Rally…..

..(enthusiastic, dynamic and fun) and the American Legion – V.A. (respectful and strong). Too bad the Dems have no one who can change tones!

James Clapper, who famously got caught lying to Congress, is now an authority on Donald Trump. Will he show you his beautiful letter to me?