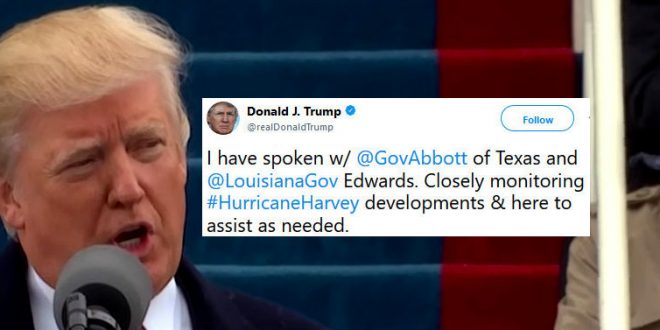 Facing what could be the most powerful storm to slam into the United States in more than a decade, President Trump and the team he has put in place at the Federal Emergency Management Agency were bracing on Friday for one of the most important tests of his presidency.

The stakes could be exceedingly high.  Few events test the effectiveness of an administration — or bear as many political risks — like a major natural disaster.

Measures being taken across the Gulf Coast are the legacy of post-Katrina reforms to the emergency management agency that focused on increasing preparedness in hopes of avoiding another flawed disaster response like the one that followed Hurricane Katrina.

Indeed, for a sense of the stakes, Mr. Trump need look no further than President George W. Bush’s response to that storm, which pummeled New Orleans in August 2005, crippling the city and leaving well over 1,500 people dead.

The response of Mr. Bush’s FEMA administrator, Michael D. Brown, and the perception the president had incorrectly assessed the storm’s impact, are widely thought to have undermined the rest of his presidency. It also led to Mr. Brown’s resignation just weeks after the storm hit.

I have spoken w/ @GovAbbott of Texas and @LouisianaGov Edwards. Closely monitoring #HurricaneHarvey developments & here to assist as needed.

How are you going to assist? Russia can't help you defeat a Hurricane!

*despite backing an attempt to not provide flood relief to anyone*